If you visit any winery in Virginia, particularly a winery in a "hot spot" of the Commonwealth for wineries (Northern Virginia, the Charlottesville area, the Shenandoah Valley), the verdict is clear: Virginia wineries have made it. The Notebook started winery hopping in fall 2001. Following a brown grape cluster sign north of Charlottesville led us to Burnley Vineyards, our very first winery experience period, not just in Virginia. We were fascinated with the business and loved the wine, so we continued visits into winter 2002. Sharp Rock, Prince Michel, Willowcroft, Breaux.....as well as locations that are sadly no longer open: Oakencroft, Christensen Ridge, Unicorn, Wintergreen, Deer Meadow, Farfelu.

When we started our journey into VAVINO, only a small leaflet promoted the (at the time) approximately 20 wineries in the state. The leaflet could be stamped at participating wineries for a gift if one collected enough stamps--usually a corkscrew. Most tastings were free, or 50 cents to $2 at the most. As the '00s progressed, the leaflet became a small booklet, with a small map. And then the small booklet became the annual Virginia winery guide and map we are so familiar with now.

The Virginia ABC laws became more winery friendly, and thanks to the lucrative backgrounds of many future winery owners (nuclear physicists, real estate moguls, successful attorneys, audio managers for successful acts such as Amy Grant and Bon Jovi--you name it), the vineyards, wineries, and tasting rooms kept coming. And they haven't stopped. Virginia is still nipping at the heels of New York state, as #5 on the list of winery rich states (California, Washington state, and Oregon are 1, 2, and 3), and there are no signs of the industry slowing down.

Thinking about our 18 years of winery hopping in the Commonwealth, we thought we would share 18 of our finest Virginia winery moments, in no particular order.

1. Discovering Ox Eye's tasting room, the first "city center" tasting room in Virginia (downtown Staunton), and kicking back on their back patio while Amtrak takes off up the bluff on its way to Chicago or New York City:

3. The soft opening of Sunset Hills Vineyard, meeting owners Diane and Mike Canney and sipping their first vintages on their porch.

4. Toasting fellow Virginia winery fans at their last stop before flying to Florence, Italy, under the walnut trees at Zephaniah Farm Vineyard.

5. Spinning tunes for Barrel Oak Winery during its opening year (The Notebook's blogmasters used to have a DJ business....)

6. Kate and Jerry Marterella, the gracious hosts of Marterella Winery (which sadly closed its Warrenton location several years ago), inviting us into their home for a fantastic spaghetti dinner.

7. Enjoying a tasting with a cockatoo (courtesy of the tasting room manager) perched on my wrist at Two Twisted Posts Winery: 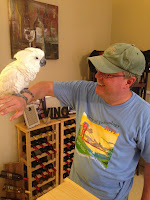 8. Meeting James East, owner and winemaker at Sharp Rock Vineyards, chuckling at his stories about winemaking through the years, and savoring his spot by the river: 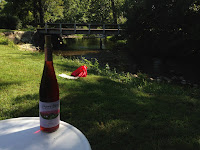 9. Chewing the fat with Scott Stinson and his daughter Rachel while soaking in the incredible views and savoring their award-winning port.

Also: Aubie at Cardinal Point, Magic at Hunter's Run, Dawg at Barrek Oak Winery, Rudy at Hiddencroft, Charlie at James River Cellars, and many more I'm sure we missed.

11. Reflecting on the 100th Anniversary of the Titanic sinking, on April 10, 2012, while drinking the appropriately named White Star White at Veritas Vineyard.

13. A conversation with Ben Renshaw and his incredible Furnace Mountain Red on a 100 degree day in August 2010 (8 Chains North Winery).

14. Talking to Phil Newcome, owner of Valerie Hill Winery, and the fascinating ghost stories involving his property (we unfortunately missed the seance the evening before). 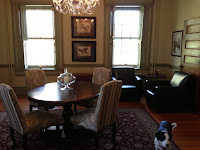 15. Enjoying a bottle with Nelson at Casanel, and hearing his inspiring America, land of incredible opportunity, stories. 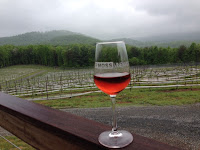 17. Sipping out of this world chambourcin by the fire on a cold, rainy November afternoon at Old House Vineyards.

18. Last, but definitely not least.....Burnley Vineyards, the first Virginia winery we popped into, on a whim, in fall 2001. Mulled wine was being prepared at 11 AM, and the pourer accidentally spilled some on my hand. "I'm sorry about that" he said with a slight slur in his voice. A new obsession was born that day. And 276 wineries now in the Commonwealth, and plenty more to come, the journey has only begun.